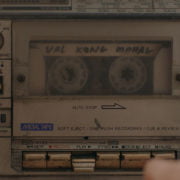 Shireen Seno’s second feature revisits the tumult of 1980s Philippines through the eyes of an introverted 8-year-old.

Boasting fantastic imagery, arrhythmical cuts, an inventive screenplay and a wonderfully nuanced performance from its child star, Nervous Translation is at once a powerful rite-of-passage drama and an allegory about the uncertainty of life in the Philippines in the late 1980s, when the country emerged from two decades of dictatorship and plunged headlong into capitalism. Tracking a second-grader’s eccentric efforts to perceive the chaotic circumstances whirling around her, Shireen Seno has teased a piece of contemplative cinema out of a restless child’s play.

A well-known experimental visual artist and curator, Seno has worked with auteurs Lav Diaz and John Torres; Torres served as producer and editor on Seno’s 2012 debut, Big Boy, as well as on Nervous. Seno is certainly a kindred spirit of both filmmakers. She shares Diaz’s fascination with mining the Philippines’ past for clues to the present, and Torres’ penchant for creating fantastical stories from outdated technology (Big Boy is shot completely on Super 8) and found objects (Nervous likes to re-create reality with miniatures.)

Nervous won the NETPAC award for best Asian film at Rotterdam and its Hong Kong screening should be the first of many stops to come. Its core content — a lonely child’s attempt to connect with her aloof mother, absent father and a disorderly society — are universal enough to overcome any potential loss in translation.

Jana Agoncillo, the small protagonist, is best known among Filipino audiences for her turn as a sweet, bubbly toddler in the unremittingly life-affirming 2015 TV series Ningning. Here, in what amounts to an against-type performance, the 8-year-old actor plays Yael, a girl who spends most of her time fending for herself and entertaining her own thoughts.

Her mother, Val (Angge Santos), slaves for long hours in a factory, and is usually too tired to communicate when she’s at home. They have a strict rule stipulating silence for the first half-hour after she comes home, and their most intimate routine seems to be when Val pays Yael to pluck her white hairs. Theirs is a cold, pragmatic relationship. Yael keeps a log of hairs plucked and her earnings, while Val treats everything as an academic subject: Time is a math question and “gallivanting” is best experienced as a correctly spelled word.

Yael’s father exists merely as a spectral voice on tapes he sends from Saudi Arabia, where he earns a living. It’s obvious the mother and daughter yearn for his presence as they make do with the frequent visits of his twin brother, Tino (Sid Lucero), a musician turned businessman whose feelings for them seem much more complex than that of a brother-in-law/uncle.

Adult viewers will easily detect Tino’s affection for Val. But Yael doesn’t — and her different perceptions are exactly what Seno is trying to illustrate. As a reaction against the frosty emotions around her, the girl finds her own way to tease some order and sense out of her surroundings. Her routine includes playing a math quiz with a classmate over the phone, making a miniature dinner with her toy cooking set and listening to her father’s taped love letters for her mother.

Defying common perceptions of children in films, Yael is neither a daydreamer nor a victim. She is discerning enough to absorb everything she sees into her vocabulary, but also canny enough to treat everything with some irony. Seno’s screenplay is spot on in navigating the complexity of a modern child’s worldview, and Agoncillo steers clear of simply making her character a bitter, unsympathetic brat.

But Nervous is about much more than Yael’s growing pains: It’s also about the Philippines emerging from 20 years of Ferdinand Marcos’ dictatorship in a collective daze, with people struggling to make sense of the opportunities and risks posed by the so-called freedoms of a neoliberal state. The adults seem more at sea than Yael, as Val struggles to contend with her husband’s overseas work and Tino silently bristles about having had to trade in his rebellious past (his band, as it happens, was called The Futures) for a comfortable life.

Seno has successfully translated all these motions and emotions into a work of structured chaos, with the viewer feeling the characters’ lethargy and disorientation through a mix of magical-realist imagery (lo-fi robots, flooded apartments and bizarre TV ads), Itos Ledesma’s blippy electronic soundtrack, and Seno and Torres’ wonderfully offbeat editing. Anxiety oozes out of nearly every frame in Nervous Translation, and for once it’s a very good thing.